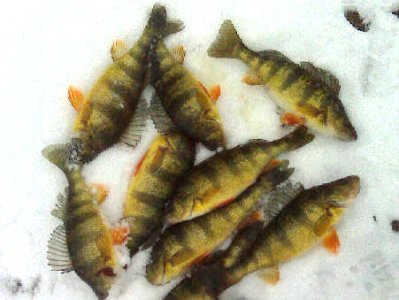 Equipment and techniques to use

Division of Wildlife Resources officials said a major component to catching fish through the ice is placing your bait or lure at the depth where the fish are and not moving your line very much, according to a DWR news release.

“Fish will often stay at a certain water depth all winter long,” DWR warm water sport fisheries coordinator Drew Cushing said in a news release. “Also, they aren’t able to move as fast to catch their food. Keep those two things in mind and you should find plenty of fish on the end of your line this winter.”

Cushing said another valuable technique for ice fishing is the “lift, drop and hold.” Anglers should drop their bait to the depth where the fish are, then using only their wrist, slowly lift the bait about 6 inches before letting it flutter back down to the starting point. This tactic catches the attention of the fish, but still makes it easy for them to get to the bait.

However, Cushing said anglers need to remember that fish are lethargic during the winter and aren’t willing to expend a lot of energy to catch the bait. Moving the lure slowly and not very far is more enticing for fish.

Fish not only move less under the ice, but they also bite less aggressively, which can make it challenging to know when a fish is striking your bait or lure, the news release said. Cushing recommended using a spring bobber or ice bobber to help detect the subtle bites.

To use an ice bobber, anglers can measure the amount of line that will put the bait at the desired depth and then attach the bobber to that point on the line. The bobber sits on top of the water with the line dangling under it, and when you see the bobber move, you can raise your fishing rod and set the hook, Cushing said.

Another piece of equipment that makes ice fishing easier is a “tip up.” A tip up takes the place of a fishing rod and when a fish takes the bait, a mechanism on the tip up sends up a small flag to alert anglers about the fish, the news release said. A tip up allows anglers to fish in two holes at the same time and still know when a fish is biting either line. However, fishing poles or tip ups can’t be more than 100 feet apart on the lake, and anglers must be able to see each pole clearly, Cushing said.

The depth at which you’ll find fish will vary by species, but typically each fish species will stay at the same depths during the winter, the news release said. Here is where you will typically find these various species while ice fishing:

-Yellow perch can typically be found either right on the bottom of the water or no more than 6 inches above the bottom.

-Splake tend to stay close to the bottom of the lake.

-To catch bluegill, largemouth bass and smallmouth bass, fish near brush, bulrushes, rocks and weeds, the news release said. Look for vegetation that’s sticking up through the ice or ridges that extend down into the water. To find the depth where the fish are, start by dropping your bait or lure all the way to the bottom of the water you’re fishing. Then raise your bait or lure 6 to 12 inches at a time until you find the fish.

-Burbot, walleye, tiger muskie and Northern pikes typically stay near the bottom of lakes and reservoirs. Each of these fish like to pick up baits or lures, swim a ways with them and then eat what they’ve picked up.

However, Cushing said fish aren’t everywhere in a lake and if you drill a hole and fish for 30 minutes without getting a bite, move to a new spot.

“Once you find a spot that has fish, keep coming back,” Cushing said. “More often than not, an ice fishing hotspot will stay hot through the winter.”