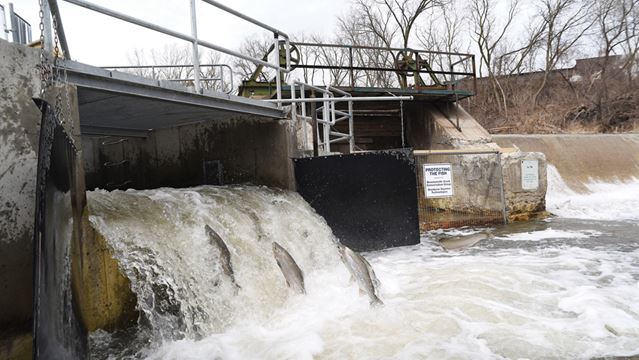 BOWMANVILLE -- Hundreds of rainbow trout can now be seen swimming and jumping up the Bowmanville Creek’s bypass channel, driven on by instinct and warmer temperatures.

Built into the side of the Goodyear dam, the Bowmanville bypass channel and fish ladder helps fish such as salmon and trout travel upstream to spawn.

The warmer water is kickstarting the trout metabolism so now is a good time to catch them in motion, says Dave Lawson, founder of the Bowmanville Creek Conservation Group.

Every spring and fall migrating fish journey from Lake Ontario up Durham Region creeks to spawn and Mr. Lawson said these trout are special. He pointed out that none of the trout are stock bred -- fish put into the lake by the government -- and all are the product of natural reproduction like the migration they are now undertaking.

It’s a migration people are welcome to witness.

“It’s a big attraction for Clarington,” said Mr. Lawson. “Bowmanville’s bypass is an open concept, people can stand over it and watch them go through.”

He reiterated that there is no fishing in the areas around the bypass and when fishing season starts on April 25, it’s only permitted south of the CNR tracks. Members of the conservation group will be at the bypass several days this week to conduct a spawning survey for the Ministry of Natural Resources and Forestry.

“It’s a scientific study they do,” said Mr. Lawson. “We’re concerned, we want to make sure they are a healthy population.”