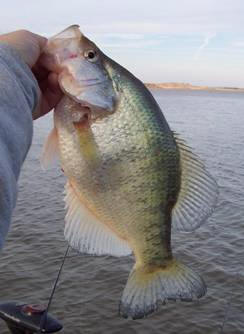 Take a survey of the favorite fish sought by anglers, and you’ll find a close run competition between walleye and perch and inland largemouth bass and bluegill.

Crappie won’t rank high, but their ranking is deceptive because when spring rolls around, thousands and thousands of anglers stop their casting for serious game fish, and turn to this little silver-sided panster. And that includes people who rarely fish. One lady I met just last spring said “Our whole family goes for crappie at least a few times in April and May. We like to fish for them, and eat them. Even my 6-year old loves to fish crappie.”

Why does this flat-sided little fish have such popularity? That’s hard to say. Maybe it’s that they’re an unusually picturesque fish, black and silver with sleek lines, or that it takes so little to catch them, usually a float, splitshot, No. 6 hook and a minnow. Or that they’re so slow and deliberate, bouncing the float a time or two, then quietly sinking it or moving off. Plenty of time to get ready for a gentle strike. One thing has to be a factor, that they’re delicious eating, so good that arguments over which is best, crappie, bluegill, yellow perch or walleye can last for hours. It adds up to lots of reasons to try this spring fishing.

There are several ways to fish for crappie, and you can choose your favorite. One is to head out alone, with family or friends, find a handy lakeshore with a brushpile or fallen log close to land, toss out minnows and wait. Chances are you’ll make a modest little haul quickly, then over the next hours pick up an occasional straggler than moves in from deeper water or elsewhere, and finally go home with a dozen or so for a modest dinner. That’s lazy, relaxing fishing, good for removing worry wrinkles and excess stress. Nothing wrong with an outing like that.

But if you like to catch a lot of crappies and are willing to work a little, there are some tactics guaranteed to improve your catch. For example, I stopped at a bridge over the west end of Clear Fork Reservoir west of Mansfield last spring and donated half an hour to watching a man try his luck. He was using a graphite “crappie pole” at least 12-feet long with the usual thin pencil float, splitshot, No. 6 hook and flathead minnow, but he moved almost constantly.

Every bit of cover near the bank was covered, every half submerged twig, half drowned willow, tree limb and more, and he obviously knew that any fish there would bite quickly (they do), because each spot got only 30-45 seconds before he moved the bait elsewhere. And with monotonous regularity his float sank or moved away and he landed another silvery morsel. When I left, he had more than two dozen fish, while others around had four or five. There’s an obvious moral to this story.

In fact, one of the great secrets of crappie fishing is simply to move occasionally. Any bit of good structure is likely to have some fish, but in short order you’ll skim the cream, and the remainder will either move elsewhere or go off their feed, stimulated by cousins suddenly thrashing skyward. So, fish one prime spot for 20 minutes or so, then move to another and another. Boat fishermen should do the same, and will have even better luck because some likely near shore spots will be inaccessible to land anglers.

A final tip is to remember that crappie often move deeper as the day progresses. They might be holding near shore in just three feet or so of water early on, but move out along the limbs into 4-, 5-, even 6 feet as time goes by. If you’re suddenly not catching anything at the depth they hit before, try raising your bobber or working the jig deeper.