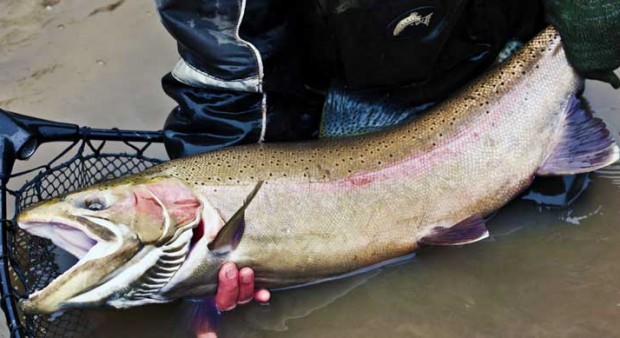 Chasing migratory rainbows in the spring as they drop-back from their natal spawning tributaries is a blast; however, you can’t beat the thrilling battle of fresh, chrome steelhead in the fall. If you have just begun this lifelong addiction, these basic tips will get you started. They are a good reminder for long-time steelheaders, too.

It’s beneficial for anglers to understand the lifecycles and interactions among each migrating species. Salmonids residing within the Great Lakes begin making their way up tributaries during the fall migration, which can start as early as late-July.

The product of this phenomenon — salmon roe — becomes a readily available food source for other species following behind the spawning salmon.

Drifting egg patterns under a float present anglers with the perfect opportunity to catch steelhead and a plethora of other migrating salmonids, such as brown trout, brook trout, lake trout, and aggressive Pacific salmon.

Salmon and trout roe is generally the go-to bait for the vast majority of steelhead anglers. However, these fish see a considerable amount of spawn bags drifting by their noses, especially those in pressured waters. This has led to the rise of artificial egg patterns, flies, and baitfish imitations. So be sure to have a variety of baits when you head out.

Anglers who can adapt their fishing techniques continue to have successful outings; a crucial skill when targeting pressured fish. For instance, the use of beads has become popular on the steelheading scene in Southern Ontario, especially among anglers fishing areas such as the Saugeen River and Lake Ontario’s north shore tributaries. The indisputable success that this relatively new bait has given anglers can make any stubborn steelheader a believer in adapting.

Consider Water Conditions In high-water conditions (generally following a rain) the key is to go big and bright with bait.

When the water visibility is low, it is important that the fish can see or smell your offering. Fresh eggs can be the ticket in these cases, as they give off a considerable amount of scent downstream.

Spinners, spoons, and large flies usually attract the most aggressive fish in the area, but these lures can trigger strikes from steelhead that turn down other baits drifting right by them. Fly fishers who decide to swing large streamers are in for a treat when a hot, fall run silver bullet aggressively smashes their offering. Simply put, nothing beats a fall steelhead on the swing.

When the water is low and clear, be sure to heed spooky fish. They are wary of fishing line, large baits, movement of the angler, etc. Downsizing and finesse fishing is crucial in these conditions. Light leaders (4- to 6-pound test fluorocarbon) while drifting small flies and single egg patterns are often a good bet when enticing these stubborn trout.

Eight inches to 2 feet of water visibility is generally the prime condition for Great Lakes steelhead fishing. Lake Superior tributaries are an exception, considering the turbidity of their water tends to not reach that of Southern Great Lakes’ tributaries. While there is much scientific jargon to be discussed here, water fertility can basically be attributed to the geology surrounding each river or creek.

Tributaries of Lake Superior tend to be less fertile, considering that these are generally high gradient streams flowing over granite rock, resulting in tea coloured water with several feet of visibility. Further south, tributaries tend to flow over low gradient, limestone bedrock. This results in productive, nutrient-rich water. The slightest amount of runoff will allow silt to enter the system, causing the turbidity to increase substantially.

The key thing to remember if you are just starting out is to focus on learning the most you can about the water, the species and by simply getting out in the water. If you can get out with an experienced angler, all the better. To the average Joe caught up in everyday life, the sense of gratification when landing a fall steelhead doesn’t need to be just a dream. Ontario offers plenty of opportunities to catch these beauties.