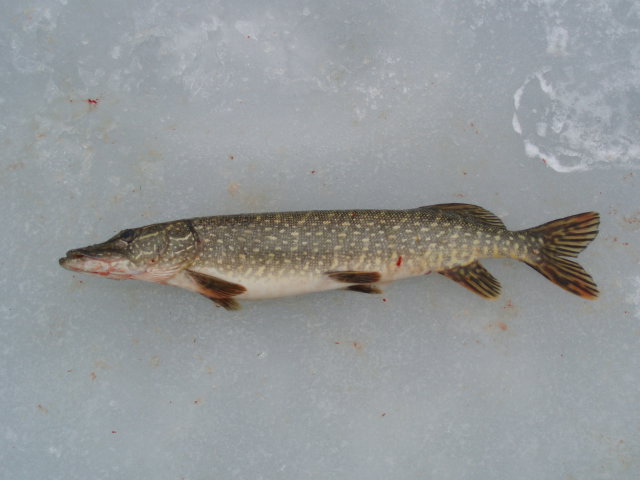 Years ago I came upon a video filmed under the ice showing a pike starring at a live minnow a long period of time before engulfing it. Totally different from an early June situation where the same fish would almost jump in the boat to grab an artificial lure. Obviously ice fishing doesn't allow us to cover as much territory as boat fishing would do, so it is imperative to take extra precaution as far as location and presentation. First: location. Every body of water has his own world: depth, bottom, current, vegetation and food supply, therefor knowing where to start will save you from wondering waiting period, remember, every body of water has his own rules, you won't look for the same details on a lake versus a river, same thing goes with a lake with sucker fish as food supply compare to a lake with ciscos. Pike is considered a warm water species, no need to say that his metabolism slows down in the winter time making him more selective to his whereabouts, look for areas that will hold a lot of ''easy to find'' food. If you catch them in shallow water first ice, you'll probably have to go deeper as the winter progress but never too far from the shallows meaning that if you were catching them on weed flats at the beginning of the season, look for the first drop on the weed line as the ice gets thicker. Second: Equipment. No need to say that with teeth, jaw and size, the last thing you want is to show up with gears that are not made to take a little bit of abuse. Tip ups : anything that as a underwater reel is fine with me, personally I have a preference for the Compac model 3019, filled with 40 lbs braided line, it allows the fish to run with the bait without feeling any resistance, also on a very cold day, you won't have to clean your holes every five minutes. Pike and walleye need different set-up that's why i always put a big ball bearing swivel with a cross snap, my favorite is the 755S series in size 1/0 that allows me to change my leader set-up to adapt to what I’m fishing for. Pike presentation don't need as much finesse as let's say trout but none the less certain details must be accounted for : a 3 feet leader using a 40 lbs test monofilament (I recommend cod or striper emery's SURELINE) , tie a number 3 barrel swivel on top, then tie a Kamakazi octopus hook number 6/0 to 8/0 using the drop shot rigging technique and then at the bottom I use a Compac ring sinker (slips through weeds much easier), always have sinker of different sizes and VERY important to put your hook not too close to bottom, in 8-10 even 12 feet +. I’ll place the hook as high as 3 feet from bottom, trust me it works. Last but not least, never be afraid to spread your tip-ups, cover as much surface as you can, 25-30 even 40 feet distance between you tip-ups is not exaggerated, any tip-up geared with a reel will allow you to do that. Safety, always is a priority, I strongly advise to take extra precaution when you go prospecting for new spots...Be safe